Rhodochrosite is a bubblegum pink to rose red stone, with occasional inclusions of creamy white and dark grey. A manganese carbonate material of the Calcite group, Rhodochrosite has a pearly luster and often displays banded patterning. It is considered a stone of love and has been called the Stone of the Compassionate Heart. One of its aliases is Inca Rose, so named because the ancient Incas believed the stone to be the petrified blood of their ancestral rulers. It is commonly found in Argentina, and is associated with the astrological signs Leo and Scorpio. It is used with the Heart Chakra. This bracelet has 6mm Rhodochrosite with silver accents and a silver spacer with the word “Loved” on it. It was made with stretch cord, and would fit a wrist between 7-8 inches nicely. 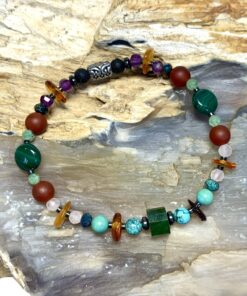 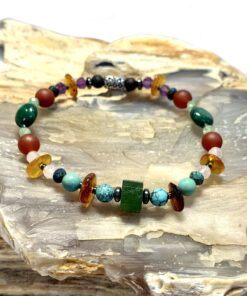